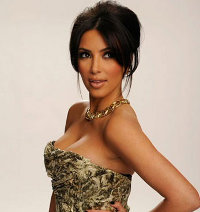 Even the world’s most beautiful celebrities can fall victim to unsightly skin ailments, as evidenced in a recent episode of Keeping Up With The Kardashians. Media mogul Kim Kardashian paid a visit to her dermatologist, who informed her that the red, irritated skin on her torso and legs was a medical condition called psoriasis and unfortunately for Kim, the condition was genetic and altogether incurable.

”Psoriasis! I cannot have psoriasis!” Kim exclaimed after learning the diagnosis. “People don’t understand the pressure on me to look perfect.” Although it’s hard to imagine Kim’s career being ruined due to a bout of psoriasis—her empire includes a several reality series, perfume, clothing, and Sketchers spokesmodeling—it’s understandable that her appearance is a large part of her successful career.

Psoriasis is a fairly common skin condition that affects both men and women. Although it can occur at any age, symptoms of psoriasis usually pop up between the ages of fifteen and thirty-five. It’s important to note that psoriasis is not contagious; touching a person’s psoriasis or a person affected with psoriasis will not lead to psoriasis in a person that doesn’t already have it. Psoriasis is hereditary and is known to worsen due to environmental factors like allergens and cold weather. Poor diets can also contribute to psoriasis.

Doctors believe that the root cause of psoriasis is an autoimmune dysfunction. When a person’s immune system mistakes healthy cells for dangerous ones, it attempts to fight them off. In psoriasis, dead skin cells take too long to rise to the surface and fall off. Normal skin completes this cycle in about two weeks, whereas skin suffering from psoriasis takes closer to four weeks. The intense buildup of dead skin causes the visual symptoms associated with psoriasis diagnosis.

Most psoriasis is characterized by red, itchy, silvery scales and is commonly found on the hands, knees, elbows, and back. But in Keeping Up With The Kardashians, Kim suffers from a rare variety of psoriasis called guttate. Guttate forms tear-drop shaped red spots on the arms, legs, and middle of the body. While guttate is still psoriasis and has similar causes, guttate is the body’s way of reacting to an autoimmune infection. Symptoms of guttate may occur after strep throat or in a bout of excessive stress. Kim’s dermatologist figured it was the latter and advised Kim to lessen her workload a little. But with an upcoming wedding and an incredibly hectic career that includes being filmed even at the doctor’s office, it’s doubtful that Kim’s stress is going to be taking a vacation anytime soon.

Psoriasis, both guttate and regular, can be treated with steroid creams. Light therapy is also popular: the same lasers that are used in IPL Photofacials and laser hair removal are used to set skin back on its scheduled shedding pattern. Many patients with psoriasis find that just a couple of sessions a week quell their symptoms completely. Once the psoriasis has subsided, doctors suggest following a diet free of excessive grease, spicy foods, and any possible allergens as not to encourage another psoriasis outbreak.